Unless you have unplugged from mainstream news and social media over the past week, you have heard that Starbucks has simplified its holiday cups to plain red instead of the more festive style of previous years. While this may seem like a non-issue to some – including me – it has sparked a firestorm among a loud, but perhaps small, group of Christians who accuse Starbucks of declaring a war on Christmas. Even Donald Trump weighed in by calling for a boycott of the popular coffee brand, while daytime TV’s Ellen DeGeneres joked about the controversy on her show.

But this coffee kerfuffle does have a silver lining. As legal marketers and public relations professionals, there are lessons that we can learn from the Starbucks snafu.

The Story Behind the Cup

The company had good intentions and a strategy behind its decision to change its seasonal cups. According to a Washington Post article, Starbucks executives said they wanted to embrace “simplicity and quietness” and show that the coffee shops are a “sanctuary” during the holidays. The company also reminded customers that it is selling its Christmas Blend of coffee as usual this year. And, according to the New York Times, the company said, it “took its cue from customers who have been doodling designs on cups for years. This year’s design is another way Starbucks is inviting customers to create their own stories with a red cup that mimics a blank canvas.” (While I have never seen anyone in a Starbucks drawing on a cup, I suppose it is possible.)

A Washington Post columnist highlights how ludicrous the controversy is, noting, “In a country where 15 million children sometimes don’t have enough to eat, how could any real Christian conclude that the color of coffee cups deserves their outrage?”

However you feel about the cups that hold your pumpkin spice latte, here are some of the legal marketing takeaways.

1. Have a strategy behind your actions. In case of pushback, it is helpful to have a marketing strategy to show internal and external stakeholders your thought process. In the case of Starbucks, they were able to tell the public that they were trying to create a less-cluttered environment and to offer a blank canvas for doodling. Keeping your strategy at your fingertips is kind of like showing your work in math class: While it won’t help you get an A, it will help you protect yourself in the face of a controversy.

2. Consumers are resistant to change. Whether you are trying to make big or small changes to your marketing strategy, understand that you may be met with some resistance, both internally and externally. For your internal audience, make sure that you get support for your ideas, especially for larger projects. For external audiences, launching new campaigns, introducing new graphics or revamping a website shakes up the status quo and can often unnerve stakeholders. Prepare for resistance. If you have a clear explanation for your strategy, you’ll have a higher likelihood of winning over audience members who are resistant to change.

3. Know your audience. While it is unlikely that Starbucks could have predicted this recent firestorm, perhaps a little market research to determine how people feel about festive cups – and the importance of Christmas designs – could have helped reduce the impact of the controversy. For legal marketers, this means knowing the tastes and behaviors of your internal stakeholders, as well as your client base. If you are redesigning the website of a law firm that is historically traditional and attracts a conservative client base, take account of those dynamics while selecting the new look and feel. You don’t have to sacrifice functionality – it can be state of the art while still appealing to a traditional crowd.

Considering a law firm marketing initiative and want to steer clear of controversy? Contact me, Stephanie Holtzman at sholtzman@jaffepr.com to brainstorm. 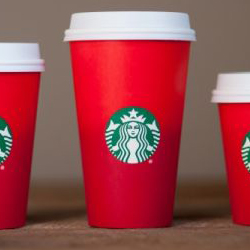