Can your law firm brand weather a crisis?

Earlier this year, the entertainment world was abuzz when a video leaked to the media showing Solange Knowles, the sister of megastar Beyoncé, physically attacking Beyoncé’s celebrity husband Jay-Z in an elevator.

Beyoncé is an artist who is known for calculating every professional move and works to present Jay-Z and herself as a perfect team. She and her publicists have put much effort into creating an almost-flawless Beyoncé brand, so this unflattering glimpse into her private life must have seemed something of a PR nightmare to the star. That is why it was no surprise when, soon after the incident, the famous family released a statement to help clear it up and explain that they had “moved forward.”

The reality is that this probably will have no long-lasting impact on Beyoncé or her brand and will be quickly forgotten when another big-name celebrity commits the next high-profile social gaffe.

Get in Front of a Crisis

Like Beyoncé, many law firms work hard over many years to create an image that projects professionalism, integrity, stability and loyalty, among other desirable attributes. Therefore, not surprisingly, many law firm marketing and communication directors go into panic mode when a crisis befalls the firm that is certain to generate news coverage that could tarnish the firm’s image. Such crises include a major lawsuit filed against the firm by a client, an exodus of partners from a profitable practice group or a criminal allegation against an attorney in the firm.

It’s important to get in front of these predicaments with a robust crisis communications plan before they escalate. If a firm handles the situation properly and in a timely way, there will most likely be little long-term impact on an established firm’s brand equity.

If you’re a little skeptical, just look to Martha Stewart for proof. She was sent to prison for lying to investigators about her sale of stock. Many naysayers were predicting that her brand couldn’t survive this public scandal and that the Martha Stewart business empire would come to an end. Her brand continued during her imprisonment, though, and it wasn’t long after she was released that Martha was back on top. Her brand survived, albeit with some blemishes. 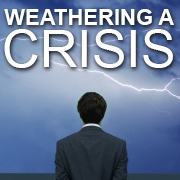