Choosing the Right Words in a Crisis Situation

The massacre of 49 people at a gay nightclub in Orlando once again brought to the forefront how important it is to use the right words when addressing the public about such tragedies.

Critics of President Obama claimed that his avoidance of the phrase “radical Islam” when addressing the American public about the Orlando shootings was evidence of his refusal to acknowledge the reality of Islamic-inspired violence. On the other side, Republican politicians were criticized for not noting that the targets of the violence were members of the LGBT (lesbian, gay, bisexual and transgendered) community in Orlando. Many felt that Obama didn’t understand the problem, while many others felt the Republican politicians disrespected the LGBT community. Granted, these omissions may have been deliberate, and a result of politics, but they still illustrate the impact of not using the rights words.

Law firms should pay attention because, at some point, they may be directly involved in an occurrence that results in injuries and even loss of lives. It is not uncommon to hear about workplace violence or a member of the executive team being killed in an accident. Unfortunately, a law firm must be prepared to face these types of events, which are usually more difficult to deal with because they are not based on issues that law firms usually manage.

A well-drafted crisis statement is useful in shaping public perceptions of the crisis and the organization itself. Otherwise, stakeholders will not know what is happening and will quickly become confused, angry and negatively reactive. A prepared statement is also an appropriate response until you have a better understanding of the situation.

The crisis statement should be simple and generic – one that conveys you are aware of the situation and are addressing the issue. Keep it concise, prioritize pubic safety and explain technical points in simple language. Try to present information from the public’s point of view, avoiding statements that sound too officious, defensive or trite. Also avoid jargon that could be misunderstood or misinterpreted. The goal is not only to provide information but also to connect with your audience.

It’s important to remember that different groups often communicate using different styles and assumptions. People’s gender, racial and cultural background; educational experience; and perceptions all influence how they receive and interpret communication. With crisis management, it’s absolutely necessary to know your audience and think carefully about how they’ll look at what your organization presents.

When you’re dealing with a crisis, using the right words in preparing a strategic statement will help a spokesperson deliver your message effectively, which is essential to a successful outcome. If you have questions or need assistance in crafting a crisis communications statement, contact me, Carlos Arcos, at carcos@jaffepr.com. 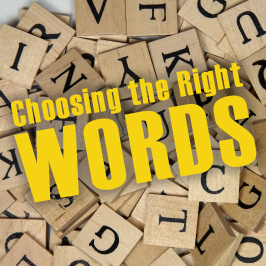