Come out from behind the brand

As you probably know by now, a robust social media and general web presence has become a must-have for professionals who are looking to support the success of their personal, as well as their companies’, online marketing and publicity strategy. Professionals (corporate leaders to politicians to artists to small-business owners like me) now need to focus on social media thought leadership, public relations and reputation to compete for new and future business, career advancement opportunities, and even mainstream media attention.

The latest IBM Study (2012 Global CEO Study) surveyed some 17,000 CEOs on the subject of social media usage and engagement. The study found that only 16% of the CEOs currently participate in social media. For many executives, a personal social media public relations effort is one of the least-used methods of customer engagement – or of marketing and increasing the visibility of their business brand for that matter. The study also found that CEOs think social media will likely become the #2 way to engage customers (57%) within the next five years.

So what’s the bottom line? According to Richard Branson of Virgin Air, in the article, “Whether you are launching a start-up or leading an established company, you should start establishing your social media presence if you haven’t already.”

Over the last 10 years in particular, I have found that most busy professionals (at least 75% of those I meet) simply do not have the know-how, ability and/or the time to stay on top of the production of personal content, building of network and targeted audiences, engaging and responding to people, or monitoring social media activity as it pertains to their own personal or business brands and industries, etc.

While internal company brand marketing or public relations managers might be able to take care of an executive’s personal social media presence, I have found that most just do not have the bandwidth to do this – and it doesn’t really matter if it’s within a large or small organization. Then there are those professionals who might be in career transition or those who do participate, but perhaps have not had the success they wish they could have in social media channels.

We all need to remember that the world of social media was built for people to communicate and publicize to other people. Facebook was not built for Pepsi to market to consumers. It was built for individual people to communicate with other people on a mass level. Then the whole marketing of the “non-personal” brand thing came along, and everything got very confusing. Read the article! I have to say that Richard Branson (among other executives, like Dell and Trump) have gotten it right and got it right from the onset of Social Media. Now it’s time for the rest of the professional leadership world to step in and stop hiding behind the brand – for the good and the growth of the brand.

I’ve been working with executives on personal branding for years, but mainly on a publicity and promotional level (from job search to business development to press/media placement). Social media has provided us with a new and improved personal publicity channel. However, there is a fine line to walk when it comes to personal social media publicity – promotion – and engagement, as it pertains to the promotion of a professional brand in a leadership role.

Why wait five years or more? It takes time to build a personal social media following and thought leadership. There is no magic to it, just dedication and work.

Laurie Pehar Borsh is a 25+ year B2B and B2C public relations and promotions veteran who merged her traditional skill set into producing and managing digital publicity and public relations campaigns and projects for clients in the early part of the new century—the dawn of social media. As a social media publicity producer, Laurie’s mission is to help clients cut through the clutter of the overwhelming “new media beast” with better strategies and best-practice tactical plans to ensure a continual return on investment. 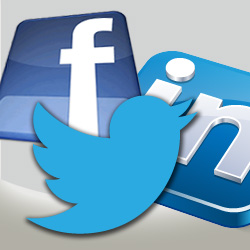 Beware the Fools of April 1!
The Great Style Debate: One Space or Two?
That’s a Wrap: Ending your year with a strong finish