(Spoiler Alert: This article contains plot details related to the TV show “This Is Us”)

I rely on my Crock-Pot at least once a week to cook homemade meals for my family. It’s a treasured timesaver for those days when things seem to run late and everyone is voraciously hungry. The other thing I enjoy weekly is watching “This is Us.” Like many fans, I was heartbroken to learn that the family’s trusty Crock-Pot was at fault for beloved Jack’s death. Many fans took to social media, angry at Crock-Pot for “killing” Jack. And just like that, through no fault of its own, Crock-Pot was pulled into a pop-culture crisis. Crock-Pot’s swift and effective response offers us, as legal marketers, a great example of good PR.

How to Get Out of a PR Pressure Cooker

Similarly, law firms can also find themselves tangled in a PR crisis without any wrongdoing. Perhaps they are representing a client that is being smeared in the press, or, like Crock-Pot, the firm’s name was just in the wrong place at the wrong time. Whatever the circumstances, we as legal marketers can learn from Crock-Pot’s response.

1. Meet your audience where it is: Crock-Pot did not have a social media account before that fateful television episode. But after it, as viewers were posting their heartbreak over the character’s death and concerns about the safety of their slow-cooking appliances, the company created @CrockPotCares as its handle. Complete with broken-heart emojis, they quickly posted the following message:

We’re still trying to mend our heart after watching This Is Us on Tuesday night. America’s favorite dad and husband deserved a better exit and Crock-Pot shares in your devastation. Don’t further add to this tragedy by throwing your Crock-Pot Slow Cooker away. It’s hard to pass something down from generation to generation if you throw it away (grandma won’t be too happy). Spending time with his family while enjoying comfort food from his Crock-Pot was one of his favorite things to do. Let’s all do our part and honor his legacy in the kitchen with Crock-Pot.

This warm message is successful in assuring its customers that it relates to their sadness, while underscoring the company’s historical role in American kitchens. The message was not one of anger or frustration that they were at fault for a dramatic television death of a beloved father and husband. In the legal profession, when faced with a crisis, we often become defensive. However, in this case, empathy over social media was the most effective strategy.

2. Stick to the facts: Crock-Pot provided media with facts about the safety of its appliances, reminding consumers that this was a fictional event and that the actual device has a stellar safety record. The company issued the following:

For nearly 50 years, with over 100 million Crock-Pots sold, we have never received any consumer complaints similar to the fictional events portrayed in last night’s episode. In fact, the safety and design of our product renders this type of event nearly impossible.

In legal public relations, when faced with a crisis, it is easy to get swept up in the emotion and become defensive. Sticking to the facts enables your audience to understand what happened and make their own conclusions.

3. Be prepared, and act fast: The nature of a crisis is that we do not know when it is going to strike, which underscores the need for a crisis plan that is frequently reviewed and updated. Crock-Pot was able to respond almost instantly and contain the possible damage to its reputation. While the company probably never envisioned the scenario in which it found itself, it is clear that they had a plan in place and were ready to execute it.

To best manage a law firm crisis, identify possible scenarios in advance, including a social media strategy and appropriate spokesperson. Create a crisis communications manual that includes key messages and possible media statements for each scenario.

The manual should also include contact information for the firm’s key stakeholders and spokespeople – including personal cellphone numbers, emails and home phone numbers. Finally, a communications protocol should be outlined for who will contact the media and when. Crock-Pot might have been able to launch an even faster response had they already established a social media presence.

The takeaways from Crock-Pot’s response are simple: Act swiftly before the message is out of control, respond with empathy and facts, and stick to key messages.

Want to discuss crisis planning before it boils over? Reach out to me, Stephanie Holtzman, at sholtzman@jaffepr.com. 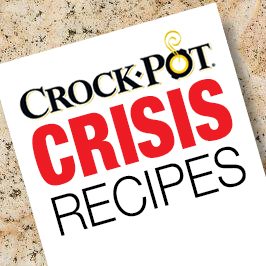