How PR Professionals Can Help Save the News Media

The Chicago Sun-Times, which, at 174 years in publication is the oldest continuously published newspaper in Chicago, ran its April 23 issue with a first page that was entirely blank. Readers wondered if there had been a colossal oversight by someone in the print department … but no, this glaring blank space was entirely purposeful and premeditated. What point was the Sun-Times trying to make? Here’s a snippet from the editors:

We're asking you to please support our daily work by subscribing to our website for $7.49 a month. That's less than 25 cents a day. In return, you'll get unlimited access to our web content and will help protect the long-term survival of our newsroom.

What's at stake
Imagine our city without our headlines.
Without our journalists to tell your side of the story.
Without our beatwriters to cover sports.
Without our watchdog reporters to keep an eye on government.
Without our columnists and editorial board to be a second voice.
Imagine it. Then help us make sure it doesn't happen.

Until now, we’ve offered our online content for free. But we can no longer afford to operate our business this way …

A little chilling, right? The Denver Post made a similar appeal last month, after laying off roughly one-third of its staff and demanding that its owner, hedge fund Alden Global Capital, sell the newspaper.

It’s really no secret that local newspapers and traditional print publications continue to struggle significantly as demand for print issues shrinks and media coverage in general becomes more splintered against today’s digital backdrop. With the many free resources that are available to audiences, readers are less and less inclined to pay for traditional print or other subscriptions.

News Subscriptions on the Decline

While some of the nation’s most prominent news outlets, including the Wall Street Journal and New York Times, did see a drastic jump in subscriptions after the 2016 presidential election, most are still seeing declining numbers, according to new Pew Research Center analysis.

Newsrooms have gone through round after round of layoffs; journalists are asked to do much more with much less; and papers have decreased in physical size, with fewer printed pages and less content. Consider it the death spiral of newspapers.

Couple these facts with the fake news sensation that has reached an all-time high, and we have ourselves somewhat of a media conundrum. (While “fake news” is no longer anything new, the term has become so ubiquitous that it earned its own entry in the Cambridge Dictionary.)

In both cases, perhaps somewhat ironically, media outlets have themselves turned to PR firms to build campaigns against the pitfalls they’re facing. The Chicago Sun-Times partnered with Ogilvy not only for its blank front page action, but also for an entire newspaper and website redesign. CNN partnered with Figliulio & Partners for its new “Facts First” campaign, which was established to combat the fake news mindset.

As legal PR and marketing professionals, how can we help to keep the media circle of life active and healthy? More importantly, how can we best serve our clients and lawyers to ensure that their specific goals are met and exceeded? Here are some ideas.

Cherish and nurture the PR/journalism relationship. In our role as PR and marketing professionals, journalists are our greatest allies. We work in tandem with our journalist colleagues, helping one another to tell the stories that people want to read. As we stay this course, let’s ensure that the PR/journalism partnership is mutually positive, honest and valuable.

Remain vigilantly committed to high-quality, ethical, accurate journalism, PR and marketing. We should have a vested interest in the health and validity of our local and national news outlets. Where news outlets have been forced to cut costs, quality inevitably suffers. Underpaid/overworked staff are forced to make decisions that may be less sound, less accurate and more biased. As such, we should be working daily to ensure that news items are nothing but the highest quality – timely, factual, compelling and ethical. Clients, businesses and daily decisions literally depend on the news cycle. Do the research, provide the facts and keep in mind that we stand alongside journalists with one common end goal.

Participate in the creative endeavors of traditional, sound media outlets. Media outlets, in the past several years, have found creative new ways to bring in revenue. Examples include community events, award and nomination opportunities, webinars, membership packages and the like. As we scour daily for opportunities for our clients, let’s not forget some of these highly worthwhile options, and participate when relevant and appropriate.

Identify and support reliable media outlets organically. Even if you/your clients cannot support media outlets through donations or subscriptions, you can still support the outlets that you deem to be reliable and nonbiased by faithfully reading, viewing, listening, sharing or clicking.

Respect the process. For as much change as the news industry has seen, and as much change as there is to come, remember that there is still a natural process and cycle in place. All the pieces of the media puzzle work together in tandem. Sound, traditional media outlets should be valued. Yes, the quick access to breaking news via Twitter or other social outlets certainly has its place, but reading a full-blown and in-depth story on a topic helps readers to dive deeper, be challenged and remain engaged.

If you would like to share an idea or to discuss changes you’ve seen or experienced in the current media climate, feel free to contact me, Bethany (Early) Chieffallo, at bearly@jaffepr.com. 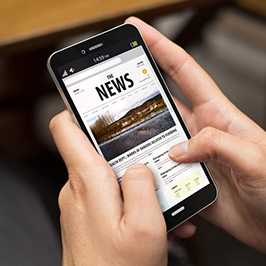 Know the 6 Basic Types of Media Interviews
How to Balance Client, Media and Colleague Expectations
Break Free from Your PR and Marketing Rut!