Fortunately, a new report from BI Intelligence breaks down the demographics of each major social media platform. Law firms can use this information to decide which networks they should target to best meet their public reputation and business development objectives. The report is also useful because it highlights the opportunities that lie ahead for each social network, how demographics affect usage patterns and why some platforms are better for brands than others.

Based on the demographic findings listed in the report, several social media platforms should be considered for inclusion in a law firm’s social media strategy.

Engagement on some of the most popular social media platforms, like LinkedIn, Google+ and Facebook, will likely reach a law firm’s target market of older, professional decision-makers.

Although Facebook still skews young, it shouldn’t be discounted because, according to the BI Intelligence report, the 45- to 54-year-old age bracket has seen 45-percent growth since year-end 2012. Among U.S. Internet users, 73 percent with incomes above $75,000 are on Facebook.

The report notes the majority of users on LinkedIn and Google+ are male. This can be offset with Instagram, where 68 percent of the users are women. Pinterest is also dominated by females (according to Nielsen data, 84 percent of U.S. Pinterest users are women). Although many businesses are beginning to use Pinterest to establish their authority in specific fields, it may be more difficult for law firms to leverage this type of social media platform.

Twitter continues to be very popular, but it has a surprisingly young user population for a large social network – 27 percent of 18- to 29-year-olds in the U.S. use Twitter, compared to only 16 percent of people in their thirties and forties. Although it shouldn’t be discounted, this social media platform should not be the initial focus for law firms.

Tumblr is a microblogging service that has recently become one of the foremost social media sites on the Internet. This platform is strong with teens and young adults interested in self-expression, but only 8 percent of U.S. Internet users with incomes above $75,000 use Tumblr. At this time, it should not be a priority to include in your social media strategy.

There is no doubt that we’re in the midst of a social media revolution, and we can no longer ignore the impact of social media on the way we view, manage and grow our brands. We must become active participants in the dialog, for social media is no longer a trend – it is now the way we communicate. 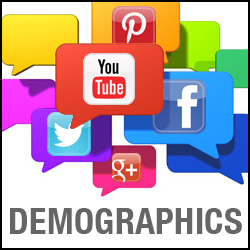