Juggling Generations: How Firms Can Mind the Gap

Our country’s population is aging. According to the U.S. Census Bureau, the number of older adults (those 75 and up) will exceed the number of youths (18 and under) by the year 2034. This will be a first in U.S. history, and it could have far-reaching ramifications for our society, from health care to housing.

One area where our country’s changing demographics are already visible is within the workforce. Three generations are sharing office space today: Millennials, Generation X and Baby Boomers. Ensuring that they — along with older generations — work together smoothly and productively can be a challenge. The following are some of the “generalized” characteristics of each group.

These disparate characteristics can be helpful or hindrances, depending on how a firm weathers its shifting demographics. While it may seem impossible to create cohesion among so many personality types, firm management must find a way to build an inclusive culture so employees of all generations can work in harmony and function as an effective team. Failure to cultivate respect for generational differences could make the workplace a toxic environment and lead to poorer performance overall.

Let’s look at a few of the arguments that arise from generational conflict, and their counter-perspectives, to get a better handle on this issue.

1) Millennials want inclusion in the process and recognition for their contributions. Why not include them in client meetings from the onset, instead of having only senior professionals at the table and calling the shots?  Yes, you may have to write off a few hours of associate time for client engagements that are billed by the hour, but this type of inclusion is important professional development for the younger employee and an investment in the strength of the firm. You also might be surprised at the innovative perspectives that Millennials bring to the table.

And remember that giving recognition is free for a firm, as well as just the right thing to do. For example, if an associate does all of the research and prepares the first draft of a bylined article for a partner, then that associate’s name should also appear in the byline. Not only are you giving the person the recognition they need for job satisfaction, but you also are helping the younger professionals garner exposure in the marketplace — and that is good for the firm.

2) That brings us to the so-called “slackers,” the Gen Xers, who are made out to be clock-watchers who can’t wait to beat a path to the parking garage. Let’s remember that many members of this generation were left to raise themselves while both of their parents worked outside the home. Their regular routines meant rising early for school and returning to an empty house with plenty of homework to do, siblings to attend to and dinner to start while their work-weary parent(s) commuted. This group learned responsibility out of necessity and is adept at getting things done. They value freedom and work-life balance, both of which are fairly easy to accommodate.

Firms have to give these professionals the responsibility they want and the authority to match that responsibility. These younger workers are the heirs-apparent to running the firm. Give them the freedom to take on leadership roles. It’s best to bequeath this seniority now while they still have more-experienced professionals to turn to for advice.

3) Now let’s look at our Baby Boomers — those competitive, workaholic senior partners who built the firm by working 60-plus hours a week, 52 weeks a year (and they will  never let you forget it). You will have to pry clients from them unless the firm’s competitors get to them first. Let’s not even talk about having any real input into firm governance with this group: You don’t.

At least, that’s how it looks from the lower rungs on the ladder, and sadly, that’s how it sometimes really is — but it doesn’t have to be that way. Many gracious senior professionals relish mentoring and sharing their incredible knowledge with the younger generations. Instead of griping and complaining that the “old goats” simply won’t go out to pasture, make sure that your firm is taking advantage of their invaluable institutional knowledge by providing incentives for their roles as mentors. Because this group is motivated by money, perhaps their compensation could include rewards for mentoring and turning over client responsibilities to younger members of the firm.

Of course, not every member of each generation shares the same traits, so your experiences may vary. Generational conflict is real, though, and it can have a negative impact on a firm’s ability to remain competitive in the future, particularly as the workforce becomes even more diverse with the introduction of Generation Z. (Yes, it’s not too far off.)  This is an issue that is not going away, so firms must be strategic in how they bridge generational gaps.

For more information about or help with creating a cohesive culture at your law firm, contact Terry M. Isner, at tisner@jaffepr.com. 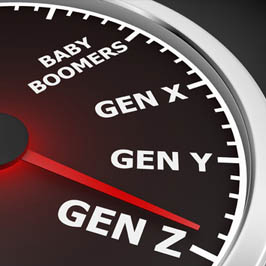 PR Is a Marathon, Not a Sprint
Learn How to Pull Yourself Out of a PR Rut
Q&A: Chambers USA Editor Toby Eccleshall and Researcher Kush Cheema