Kids are adorable. They are also unpredictable. That’s why, when professor Robert Smith gets videobombed by his dancing and delightful children during a live BBC interview about the impeachment of South Korean President Park Geun-hye, the clip goes viral, and Smith and his family turn into Internet sensations overnight. Smith will forever be better known as the “BBC Dad” than an expert in Korean politics.

The interview clip has been seen by millions of people around the world, even becoming fodder for late-night television. Jimmy Fallon spoofed the video in his opening monologue, while the Daily Show’s Trevor Noah had the most hilarious description of the segment. After the young, yellow-sweatered toddler with so much swag sashays into the room, Noah says:

“Then the baby Ubers in, but the hero has to be the mom who ‘Kramers’ into the room and airlifts both kids out of the room at the same time – in record time. I bet if Navy Seals were watching that extraction, they were saying, ‘If we had her with us, we would have gotten Osama alive.’”

While I have to admit all of this is hilarious, it does offer a teachable moment for conducting broadcast interviews.

When the interview is live, there are no do-overs, cuts, gimmes or mulligans. If you agree to a live interview, be sure you are comfortable thinking on your feet and responding off the cuff.

While in this case the adorable kiddos were the distraction, there are so many possible diversions in a live interview that could just as easily take you off course, even if the interview occurs at your office or a broadcast station’s studio. Instead of your family bursting into your office, a reporter’s line of questioning can suddenly veer off into an area you’re unfamiliar with and not prepared to discuss. The goal in such situations is to quickly pivot and steer things back to more comfortable terrain. Also, use transition wording like, “That is one perspective, but what is also important to remember is …” to refocus the reporter back to the topic you can discuss.

How you sit, how often you smile, when you make eye contact – these things matter for television. Make it easier to convey knowledge and authority by practicing good posture. Smile to put the interviewer and the audience at ease. Make eye contact with the host to develop a relationship and convey the fact that an engaging conversation is happening.

Sometimes you may be faced with a remote interview where, for example, you’re in New York and the reporter is in a studio in Atlanta. You’re ushered into a dark room, and it’s just you and the camera. You’re not sure where to look or whom you should address your comments to.

In a remote interview, go through a couple of system checks to be sure nothing will catch you off-guard. Make sure the earpiece works and that you can hear the reporter easily and clearly. Check your appearance and that you’re sitting up straight. Finally, look directly into the camera and address your comments to the screen. Once you have the all-clear from the producer, only then is it safe to get up and walk away from the camera. Turn off your mic before making any other comments and breathe a sigh of relief.

At the end of Trevor Noah’s piece on the “BBC Dad,” he concludes that the reason Smith did not get up and shoo the kids out of the room was because he wasn’t wearing pants. He goes on to claim that no anchors wear pants. We’ve even seen a bit of this theory on SNL’s Weekend Update, where Michael Che is all business up top, but has on jeans and basketball shoes on the bottom.

It goes without saying that you’ll wear pants to your interview, but you should think about the color and fit. (My colleague Lisa also provided some fashion tips for broadcast interviews in her post.) For men, medium blues, browns and gray suits are the best. Solids are better than patterns, and avoid bright colors and plaids, stripes and herringbone patterns. Stay away from bright white, which will wash you out. Ties should be uncomplicated.

For women, keep dresses and suits simple with few patterns, avoiding checks, dots, paisley and stripes. Magenta, periwinkle, cornflower blue and navy all read well on camera. Try to avoid solid black, too. While it might be slimming in real life, an all-black outfit makes it hard to distinguish between your arms and torso. Keep makeup and jewelry simple – dangly and jangly bracelets and necklaces make too much noise. Finally, try to wear a jacket or a top that will make it easy for the producer to attach the mic.

For more media training tips on how to secure and shine in your broadcast interviews, contact Vivian Hood at vhood@jaffepr.com. 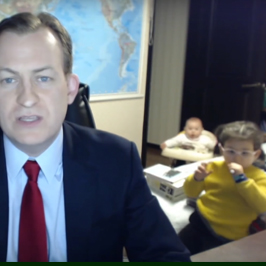 PR Is a Marathon, Not a Sprint
Learn How to Pull Yourself Out of a PR Rut
Don’t Know Your Audience? Your PR and Marketing May Fall Flat