One lawyer’s public racist rant: Mistakes made and lessons learned

Roseanne Barr and Aaron Schlossberg have one thing in common: They both recently were caught up in scandals over their racist comments broadcast via social media. Barr tweeted a racist comment about former Obama aide Valerie Jarrett. Schlossberg, a solo New York attorney, screamed at people speaking Spanish in a New York café, which was captured on mobile phone video and went viral. (That episode, by the way, spurred reports, along with previous photographic and video evidence, of Schlossberg being belligerent and displaying racial animosity in public.)

One fundamental difference between Barr and Schlossberg is that while Barr is used to the public spotlight and has a fortune to shield her from financial fallout, even cancellation of her hit ABC sitcom “Roseanne,” Schlossberg became notorious in an instant and his law practice has undoubtedly taken a major hit. The public’s attention has already moved on from Schlossberg, but not before politicians and others in New York have called for Schlossberg’s disbarment and he was reportedly kicked out of his New York City office space. Also, the Yelp and Facebook pages for his law office, which he started in 2012, have been flooded with negative reviews and comments. And let’s not forget the Mariachi band-led protest by 500 people outside Schlossberg’s apartment.

All of this justified rancor directed at Schlossberg can’t be good for his business. The damage to his personal and professional reputation is real. Just think about the ensuing collateral brand damage if Schlossberg were an attorney at a much-larger law firm.

Schlossberg’s first mistake: his conduct, of course, which was reprehensible.

According to news stories, Schlossberg threatened to report employees at the New York café to immigration officials to get them “kicked out of my country.” During an earlier incident, he was heard telling an anti-Trump protester: “How dare you question my president ... I don’t give a (expletive) about your country ... You should just say ‘Thank you for letting me in your (expletive) country.’”

Second mistake: not holding oneself to a higher standard as a lawyer.

Lawyers take an oath to uphold laws, follow ethical rules, and generally practice fairly and honorably. Rude and disrespectful behavior, especially in public, is considered antithetical to the legal profession. Anyone who believes in racial equality and champions the contributions that immigrants make to U.S. society and culture would probably say that Schlossberg deserves public shame and might even deserve to suffer financially as a result of his actions.

Who among us doesn’t sometimes have our buttons pushed to the point of wanting to go farther with our opinions on social media than cooler heads would suggest? Restraint is a virtue. As a licensed, working attorney anywhere, let alone in New York City, Schlossberg simply should have known better.

Third mistake: running from the problem.

For the sake of assuming Schlossberg has remorse and should be allowed to recover, he certainly did not handle the ensuring crisis with a thoughtful, managed approach. We knew Schlossberg was in trouble as soon as we saw the videos of him hiding behind various hats, sunglasses and umbrellas, and running from reporters who confronted him on the streets of New York. Instead, he could have recognized the seriousness of the issue, offered an immediate (next day) mea culpa and suggested a more formal apology would be forthcoming.

Sure, Schlossberg probably did not have a law practice that necessitated having a public relations professional on retainer, but after the “café” video hit social media, someone should have told him to hire PR help – and fast! He should have immediately taken a step back and realized that he might not be equipped to handle the matter on his own. For example, some PR pros have suggested that he could have announced – and followed through with – a plan to enroll in an anger management program to address his issues. Whatever the course, consulting with a PR pro on a crisis communications plan could have helped begin the process of repairing his reputation and, perhaps, his underlying anger and racism.

It took a full week after the “café” incident went viral for Schlossberg to apologize – via a statement sent out via Twitter. It was shortsighted for him to think a tweet, sent out a week later, would make anyone happy.

New York Times contributor Margaret Renki wrote a column recently about how to do better at apologizing. With Barr’s racist tweet as the backdrop, she acknowledged that in this “Age of Outrage,” any public act of poor judgment is met with fury, but that a bigger problem lies with the offenders, “whose apologies ring hollow because they almost always involve some variety of self-justification.” Schlossberg’s Twitter apology read, in part, “What the video did not convey is the real me. I am not a racist.” Renki suggests that the appropriate response when we mess up is a genuine apology, “because to acknowledge a mistake is to participate fully in the human condition.”

Tread carefully in and around social media.

Lawyers expressing their opinions and First Amendment right to free speech via social media either intentionally or inadvertently (as Schlossberg learned the hard way) can have negative consequences and cause conflicts with clients. It should go without saying that a public rant like Schlossberg’s, especially when everyone carries a video camera in their pocket nowadays, is a bad idea for most people, and indeed for most lawyers. Beyond a hate-filled tirade, even something as simple as “liking” a political or controversial Facebook post, or tweeting or retweeting a toxic comment, could put an attorney on record for a point of view that may not synch up with his or his firm’s best interests. It need not just be downright racist. The best advice from industry watchdogs like the American Bar Association is to exercise caution about what you say online.

Taking it a step farther and be proactive.

Every law firm should have a social media policy that provides guidance on how lawyers and other employees should behave while interacting on social sites. (And that should extend, logically, to unwittingly getting caught on video or in photos doing or saying inappropriate things in public.) Some law firms may take a decidedly less heavy-handed approach – simply asking attorneys to use discretion and good sense rather than stifle personal opinions. Other firms may prefer a more-rigorous approach. While it’s mostly a good thing for attorneys to use social media to share firm content and engage in conversations online, it’s also crucial to document in writing how attorneys should use social media in a professional manner that helps protect themselves and a firm’s brand and reputation.

Have other thoughts about crisis management or lawyers navigating pervasive social media? Contact me, Randy Labuzinski, at rlabuzinski@jaffepr.com. 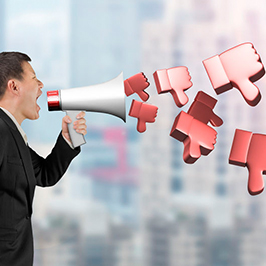