PR lessons from the 2013 Super Bowl

The 2013 Super Bowl was an exciting game that offered a number of useful lessons for legal marketers.

Capitalize on social media: Oreo made the most of the blackout during the Super Bowl when it tweeted “You can still dunk in the dark” quickly after the power outage. Since then, the image has been retweeted more than 14,000 times and has received more than 20,000 Facebook likes. http://newsfeed.time.com/2013/02/04/watch-oreos-snappy-super-bowl-blackout-ad/

Have heart: Chrysler reminded us of its deep-rooted brand by paying homage to our troops and our country, while Budweiser’s Clydesdales ad tugged at our heartstrings.

Generate buzz: The advertisements are focused much less on actual products and more on generating buzz. The most outrageous, thought-provoking, humorous ads outlive their 30-second time-slots as they are shared via social media, reported by news outlets and discussed around water coolers. People are still talking about the popular “cat-herding” commercial from several years ago!

Don’t go too far: GoDaddy and Volkswagen are facing backlash for their ads from critics and the public who say they crossed the line.

Be prepared: You never know when the power will go out!

If you see any other lessons to be learned from this year’s big game, let us know by commenting below. 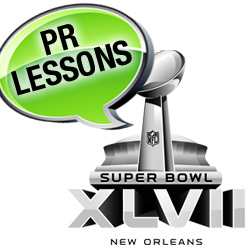