Recently, we’ve seen the power of social media to influence the public conversation, this time in the legal arena. Over the past few months, the Supreme Court tackled several hot-button issues, including affirmative action and the separation of church and state, and those on the losing sides harnessed the power of social media to help turn their dissents into trending topics.

One primary reason these rulings received so much attention is because of their importance to people. For example, the Hobby Lobby and Wheaton College cases both had to do with reproductive rights. In the latter lawsuit, the majority ruled that a liberal arts college was not required to fill out a government exemption form to avoid the Affordable Care Act’s contraception mandate. Justices Ruth Ginsburg, Elena Kagan and Sonia Sotomayor said in the dissent that allowing the school to skip the form contradicted the court’s own writing in Hobby Lobby, which was issued only three days earlier and found that the form was a respectful alternative.

No longer are these rulings and dissents limited to analysis by legal scholars and attorneys. The public has taken to social media to provide their own analysis and commentary. With the dissents repeatedly rehashed over Twitter and other social media platforms, they could very well influence public perception on these issues and create lasting legal consequences. As polarizing cases gain attention and more people start considering issues that may have gone unnoticed in another era, the Supreme Court and policymakers may be forced to listen.

What can law firms and legal marketers learn from the Supreme Court’s example?

The biggest takeaway is that “social media spreads like wildfire,” allowing everyone – not just the media – to participate immediately in, and even influence, the conversation. When dealing with a crisis situation, for instance, law firms should not only look to traditional media to get out their messages, but they should also use the various social media platforms like Twitter and LinkedIn.

Content in the form of pithy copy and clever images is a big draw on social media, as evidenced by the number of memes that went viral after the Hobby Lobby ruling. Therefore, your law firm social media strategy should include visual content. One way to maximize the effectiveness of an image is to add text, such as a quote or a title. You can easily do this using basic image-editing software, such as Photoshop, or by using one of any number of free, online “meme generators.”

For better or for worse, social media has forever shifted the power dynamic. Brands can try to control their reputations, but in the end, people – now empowered by social media – can assert ample influence. For law firm marketers, there are plenty of rewards for using social media in creative and innovative ways. A law firm can build a following by being genuinely interesting and posting engaging, entertaining and relevant content. Social media also creates far more opportunities to reach clients and for clients to, in turn, serve as positive brand ambassadors for the law firm.

Did you glean any other marketing or PR lessons from the Supreme Court’s recent decisions? Leave a comment or message me, Carlos Arcos, at carcos@jaffepr.com. 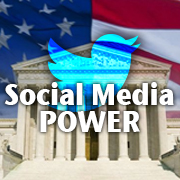