Thou Shalt Not Lie: How Jian Ghomeshi broke crisis rule #1

It’s been an awful couple of weeks in Canada. First, two of our military were killed on domestic soil, just for being in uniform. One was run over. Another was shot and killed in an attack on the seat of Canada’s federal government, Parliament Hill in Ottawa.

Those tragedies have shaken Canadians.

And then Canada’s national broadcaster, the CBC, abruptly fired one of its most popular presenters, Jian Ghomeshi, host of the morning arts and culture show “Q.” What’s followed has been shocking, sordid and just plain saddening. Over the span of about 24 hours, CBC listeners went from being outraged at Ghomeshi’s firing to shocked at the reason he gave in this Facebook post and then appalled as, little by little, the full story began to uncoil.

I was among the many CBC listeners following this saga. While most were puzzled that he’d go into such detail in his Facebook post, I had also read that Ghomeshi had hired a prominent Canadian crisis PR firm. Reading the Facebook post from that point of view, I knew what Ghomeshi had been advised: Get it out yourself, warts and all, to get ahead of the story. This is basic crisis management. You want to be in control of releasing the facts, no matter how bad they are, because they’re going to come out anyway. You might as well control how they come out.

But, as news trickled out that there was more to the story than Ghomeshi’s version of events -- horrifyingly so -- a sneaking suspicion began to cross my mind. The crisis strategy so obviously mapped out by Ghomeshi’s PR firm would only work if he was getting the whole story out in his Facebook post. If he was holding back even the slightest thing that could come out later and hurt him, no crisis PR consultant would have OK’d that post. It would make no sense.

Unless, of course, Ghomeshi lied to his PR firm. I began to suspect this was true, as story after story came out with evidence there was more here than just an angry ex-girlfriend (which, by the way, is an awful explanation in and of itself).

And then, it was confirmed. Ghomeshi’s PR firm fired him, allegedly for lying to them.

The Price of Deception

Ghomeshi broke crisis rule #1: Don’t lie to your PR firm. You’ve hired them to do a tough job, to get you out of a messy situation with the least damage possible. Some harm is going to come to your reputation; that’s inevitable. The question is how much and whether it can be mitigated.

But, if you hold anything back from your PR firm, either out of oversight, embarrassment or just an inability to see the truth of the situation you’re in, you’ve pretty much ensured your agency will fail. Your PR counsel can’t create any kind of workable strategy if you’re not honest. Any shading of the truth or hiding of evidence will not help you; it will harm you. You’ll have lied to some of the only people in your corner.

And, in that case, your agency has every right to fire you.

Do you have any comments about how to handle a law firm crisis? Leave a comment or contact Vivian Hood at vhood@jaffepr.com. 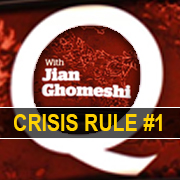