Uber PR Crisis: What law firms can learn from the startup's debacle

Here we go again. Uber, the premier ride-share company that is available in more than 200 cities and growing, is unraveling in the headlines after threatening journalists’ – and allegedly all of their customers’ – privacy.

Uber senior vice president Emil Michael recently suggested that the company should hire a team of opposition researchers to dig up dirt on its critics in the media, specifically Sarah Lacy, the editor of tech site PandoDaily, whose critical article sparked the nasty comments that have led to a flurry of backlash against the company and revealed other potential privacy breaches. Lacy was criticizing the company’s “Hot Chicks” promotion that it was running in France, which paired riders with model-type drivers, as well as the company’s misogynistic culture. The threats were taken very seriously, and Lacy is now living with bodyguards. Her whole life has been turned upside-down.

And now, reports of Uber’s “G-d view” tool, which tracks users without their permission, has prompted Sen. Al Franken to write a strongly worded letter criticizing the company’s disregard for its customers’ privacy.

After management has had such serious lapses in judgment, can good PR and crisis management save the company? Will they even try? Law firms regularly face crises and, unfortunately, Uber has become a case study of how not to manage one.

How Not to Manage PR

Uber and its leadership team is obviously doing many things right, but this latest incident is one of a growing number that has put the company in the news and forced riders – and investors – to question the company’s leadership.

Damage control with this latest incident was handled swiftly. Uber CEO Travis Kalanick issued a public apology via Twitter, denouncing the comments as “terrible” and stating that they “do not represent the company.” Michael also issued a Twitter apology for his remarks and personally apologized to Lacy. He was not fired. Were their actions enough? Time will tell.

This incident was just one in a long series of PR mishaps for Uber. For example, in September 2013, Uber took issue with a passenger’s accusation that she was choked by her driver, saying in a statement that the driver was defending himself from an intoxicated passenger who was hitting him. In response, Kalanick sent an email to his PR team and accidentally copied a tech blogger. There was the tragic accident on New Year’s Eve 2013, when a young girl was hit and killed by an off-duty Uber driver in San Francisco. Many considered Uber’s response to the accident as “callous,” and critics called the company’s insurance policies into question. And then there’s the controversy over surge pricing – demand-based increases in fare prices that can climb as high as 10 times the normal cost of taking an Uber.

Even Uber’s drivers have complaints. They claim to sometimes make less than minimum wage, according to a recent Business Insider article. The company also classifies them as independent contractors, a fact that some drivers are contesting in court.

In May, I wrote about the L.A. Clippers owner Donald Sterling’s racist comments and offered a hypothetical “Sterling & Associates” scenario to illustrate how a law firm could manage in a similar situation. In that case, the Clippers managed the situation well – they assigned new leadership and crafted strong messages. They were able to rally fans and turn a negative situation into a positive one.

Uber is not moving along the same trajectory. If Uber were a law firm, they would be quickly pegged as terribly aggressive with sub-par client relations. Imagine if a law firm suggested tracking their clients’ bank accounts? Or if they threatened opposing counsel? There would be swift, decisive consequences. Clients would flee, and the accused attorneys would likely be disbarred.

Will Uber survive this web of PR debacles? Perhaps, for now. The company offers a widely popular service that has not yet been surpassed by its competition. According to a Newsday article, all of this publicity may even be good for business. However, their public apology via Twitter seems like too little too late. As my colleague Kevin Aschenbrenner recently wrote, honesty is always the best policy, especially in PR. It will be interesting to see how the next chapter of the company’s privacy violations unfold, and if they are able to produce any positive news to generate good will.

Do you know of any law firms in an “uber” crisis? Feel free to get in touch with me at sholtzman@jaffepr.com. 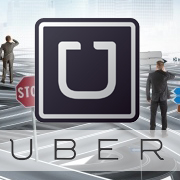