What Can Male Lawyers Do to Support the #MeToo Campaign?

Women across America are feeling empowered to speak up against sexual harassment and assault in the workplace, and employers are listening. There have been major consequences for scores of prominent male figures who have been accused of serial misconduct, including comedian Louis C.K., politician Al Franken and journalist Charlie Rose, among many others. What began as a rolling boil via the Twitter hashtag #MeToo has erupted into a possible sea change in how women’s allegations of sexual misconduct in the workplace are treated by those in positions of power.

No matter what category of male lawyer you fall into, there is something you can do to help support the #MeToo campaign. The following advice is not always going to be easy to follow. In fact, some of it could jeopardize your career. But justice is the foundation of law, and acting justly and ethically is critical to being a good lawyer.

If You’ve Done Something Wrong, Admit It

I said this wasn’t going to be easy, right? I said you might even be putting your job in the crosshairs, didn’t I? Admitting you did something wrong in the workplace is both difficult and not always best for your employment situation. But it is the right thing to do for your female colleagues and your firm. By being honest, you are doing the least that you can do to rectify the situation, and you’ll be doing a service to the firm by giving it the opportunity to address the issue properly.

Of course, timing is everything when you’re making this kind of disclosure. Admitting to wrongdoing after you’ve been caught really doesn’t give you a lot of morality points. This is especially true if you have a history of denying allegations against you. But if you come out before any allegations and proactively admit to the wrongdoing, you will be taking a more honorable path – one that begins with the hard work of addressing your behavior and the effects it has had on your victim or victims.

If You Know of Someone Committing Wrongdoing, Call It Out

Don’t be complicit in someone else’s bad actions. If you know that a male colleague has a problem respecting personal boundaries, physical or verbal, you will be doing the right thing by bringing that individual’s behavior to firm management’s attention. In other words, just like they say on the subway, “If you see something, say something.”

Of course, what management does with this information is most likely out of your control. Ideally, given their seniority, they have an understanding of how to handle such allegations in a way that addresses the needs of any victims, or at least they have an HR department that can guide them through the process. Still, you may want to notate your correspondence with firm management in the event that their response is unsatisfactory, leads to the perpetuation of a hostile work environment or even retaliation.

Do Not Question the Validity of Your Female Colleagues’ Experiences

I know you are lawyers, and so believe that allegations have to be supported by showings of fact to establish a legitimate claim. But sometimes things aren’t so simple. We have seen, time and again, that the law can fall short in situations involving sexual harassment and assault. One reason for this is that evidence in sexual misconduct claims often takes the form of recollections of actions or conversations, as opposed to something more tangible. Also, societal dynamics between the sexes create a power imbalance where women who accuse men of sexual misconduct are disbelieved or even shamed for coming forward.

That’s why, as a male lawyer, it is important that you take the initial position that you support your female colleagues when they make accusations of sexual misconduct. Let your firm follow through with an internal investigation (preferably by a third-party investigator), and comply in full with any requests made of you. If the law becomes involved, assist without encumbering the legal process. Be transparent in all actions that you take.

The legal industry is grounded securely in tradition. Unfortunately, traditions of our past did not always reflect acceptable behavior, including how workplaces treated women. But that doesn’t mean that things can’t change. In fact, for the wellbeing of our female colleagues, they must. If you are a man, the best thing you can do to support positive change is to contribute to a harassment-free workplace by listening to, believing and addressing the experiences of your female colleagues to ensure that everyone – no matter who they are – can work free from hostilities.

Do you have thoughts about the #MeToo campaign and the recent spate of high-profile sexual allegations made against prominent male professionals? Contact Terry M. Isner at tisner@jaffepr.com. 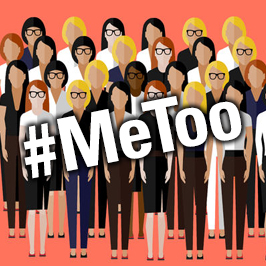