What do the Oscars and law firms have in common? White men.

The nominees for this year’s Academy Awards were released earlier this month and, once again, this year’s roster revealed an unfortunate lack of diversity. White performers dominated all of the acting categories, and no female writers or directors were included in the list of nominees. As many critics have pointed out, this reflects a disconnect between the entertainment industry and the face of America.

However, the entertainment industry isn’t the only sector receiving criticism for its seeming inability to include more women and minorities. The legal services industry, especially large law firms, has long come under fire for failing to either recruit or retain diversity in the workplace.

While the percentages of women and minority associates have grown over time, a disproportionately small percentage of these attorneys achieve partner status at their firms. The good news is that many law firms are making a concerted effort to be as diverse as possible and recognize that managing diversity in the workplace is not only the “right” thing to do, but also makes excellent business sense.

As companies have become more committed to workplace diversity, they have begun to expect more diverse outside counsel, and law firms are paying attention. In addition to women and minorities, many diversity initiatives have begun to include people with disabilities; gay, lesbian, bisexual and transgender attorneys; and other underrepresented groups.

However, despite the best efforts of law firm leaders, the types of organizational changes that have the best chance of creating parity – like the newer business development models – are not experiencing widespread implementation. Instead, many firms fail to offer initiatives or programs designed to encourage inclusion of women and minorities, such as targeting minority bar organizations when recruiting at law schools or offering training and mentoring programs that might aid in bringing about equality in status and compensation.

Although, smaller firms may have more limited resources to compete with larger firms for talent, diverse attorneys, there are still ways for these firms to boost their diversity recruiting. It may be as simple as hiring a diversity management consultant who specializes in helping firms recruit minorities and women, or considering starting or participating in a mentoring program for minorities attending the local college who might be interested in careers in law.

Regardless of your firm’s size, it’s important to remember that an essential first step to diversifying your law firm is to create an environment that supports diversity and respects all members of the firm. It’s also imperative that support for the action comes from the very top of the organization.

Diversity Is No Joke

Last year, host Ellen DeGeneres kicked off the Oscars telecast with a joke that read as a warning, noting that the night could end two ways.

Although the joke greatly simplifies the issue, the fact remains that a lack of diversity can be viewed negatively from the outside, which may affect existing client relationships, new business development, and the recruitment of talented attorneys and staff—not to mention the overall reputation of the law firm.

How is your law firm handling diversity? Contact me, Carlos Arcos, at carcos@jaffepr.com, with your perspectives. 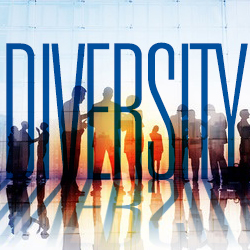