Why your managing partners need to be on social media

How can law firms use social media to attract more clients and further their public reputations? As a digital publicity specialist working with executives in the social media space, my first response to that is to put more managing partners on social media and optimize their personal brands for the good of the firm’s.

In today’s new media world, leaders – including law firm managing partners – have the added responsibility to be the face of their organizations on social media just as they are expected to represent the company offline. However, buy-in for this notion has been slow. It was reported in 2013 that 70 percent of Fortune 500 CEOs still were not using social media. In my opinion, things have not changed a whole lot in a year, and that especially holds true for the legal industry.

Act as a Spokesperson

Traditionally, marketing and public relations executives (in most industries) have been responsible for advocating and communicating the message about a company and its benefits to the public, while corporate leadership has been charged with “shaping the market” as a thought leader. And, up until now, the outlet for thought leadership has been traditional media, i.e., print, radio and television.

But various executives are bucking this stereotype of the silent leader, including Richard Branson of Virgin; Doug Conant of Avon and the former Campbell Soup CEO; Peter Aceto, the former CEO of ING Direct, now with Tangerine; and Bill Gates of Microsoft. Perhaps they are more inclined to be visible online because they are known to the public as the founders of their organizations and products, or, in some cases, they were naturally drawn to social/digital media from the get-go.

It’s only natural that a law firm managing partner who is not overly personable by nature will be less open and approachable on social media. He or she may be an exceptional leader, but may not be as vocal about his or her passion for the legal industry, and that’s OK. Not everyone can act in the same bold way on social media as the likes of Sir Richard Branson. However, managing partners are leaders, and therefore they need to do more than manage the direction of the firm. They also need to manage the law firm’s image by acting as its spokesperson, setting the tone for the firm, including the development of a viable digital persona across social media.

Of course, a managing partner is accountable for the law firm’s brand in terms of whatever they say and do online and off. Their opinions can be taken out of context on social media, as information can be amplified, instantaneously transmitted and easily misinterpreted.

This is why it can be a prudent measure to put someone in place to manage your law firm social media, or at least edit and consult managing partners on the use of social media, to assuage any fears. This can be the job of the firm’s PR/marketing agency, the in-house marketing department or someone who is dedicated to supporting firm management.

In the digital age, law firm management shouldn’t be asking whether social media is right for them. The question is how they will use social media to enhance not just their own images, but the overall brand of the firm.

Laurie Pehar Borsh is a 25+ year B2B and B2C public relations and promotions veteran who merged her traditional skill set into producing and managing digital publicity and public relations campaigns and projects for clients in the early part of the new century—the dawn of social media. As a social media publicity producer, Laurie’s mission is to help clients cut through the clutter of the overwhelming “new media beast” with better strategies and best-practice tactical plans to ensure a continual return on investment. 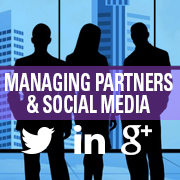 The Great Style Debate: One Space or Two?
That’s a Wrap: Ending your year with a strong finish
Social Media: Smaller and mid-size firms need to catch up